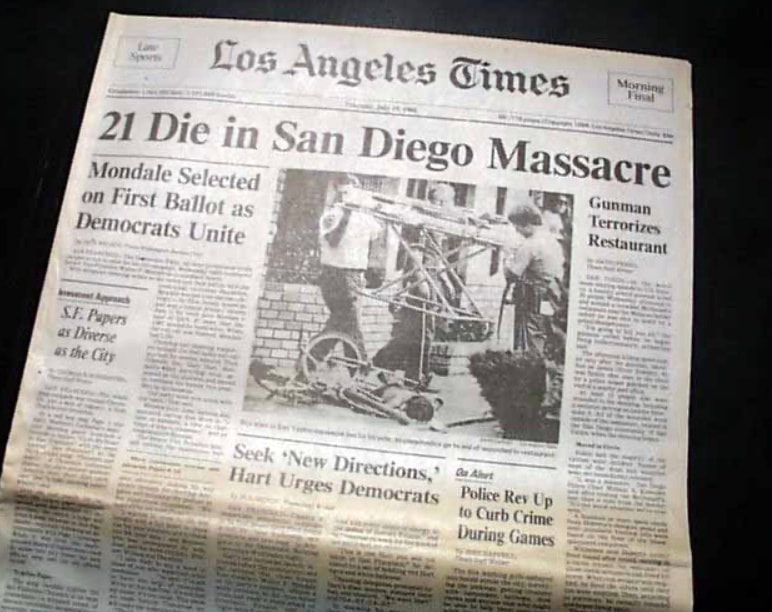 ​It’s the bikes laying on the ground outside the entrance to the McDonald’s that I still think about most.

Life was so full of excitement that summer in 1984 right after college. I had landed my first job as a newspaper reporter, working at the Los Angeles Times in their San Diego bureau.  I had an apartment two blocks from the beach. The Summer Olympics were underway around me.  I was learning to windsurf.  And then on July 18, 1984, I witnessed things that prey and linger to this day.

As the new kid in the San Diego newsroom in an era long before internet and cell phones, I was sent by an editor to get in my car to follow up on reports that had begun to crackle across the police radio monitored by the city desk.

Something about a shooting at a restaurant. All we knew was that I was heading to a possible crime scene.

But after my arrival as one of the first reporters at the location of this McDonald’s in nearby San Ysidro, it became clear this event would consume the entire newsroom and the front page.

I had been sent to the scene of the deadliest mass shooting by a lone gunman in modern American history.  (Tragically, there have now been at least seven more deadly shootings in the years since.)

It was difficult for everyone to comprehend, particularly a 21-year-old Midwestern kid who had just landed in southern California and had  enjoyed a safe, privileged life.  Nothing quite like this had happened in America since a gunman had ascended a tower at University of Texas in 1966, when I was three.

On this afternoon in July 1984, an unemployed 41-year-old man with a history of domestic violence — who just two days before had spoken to a receptionist on a mental health helpline but not yet received a call back —  entered a McDonald’s near his home and started to shoot.  Before being fatally shot by a police sniper 77 minutes later, he had killed 21 people and injured another 19.

One of my contributions to the newspaper’s coverage that day was tracking down which car in the McDonald’s parking lot had belonged to the shooter: a battered Mercury Marquis with a bumper sticker that read, “I’m not deaf.  I’m just ignoring you!”

The San Ysidro massacre, as it came to be called, irretrievably changed everything for so many families.

Whenever I reflect about that day, which I still do regularly, it’s always first about the bikes and the boys.

The shooting inside the restaurant had already started, when three friends, all 11, rolled up on their bikes to the sidewalk next to the  McDonald’s entrance.  They had biked to get doughnuts down the street, but one of them suggested they also get ice cream, so they went onto McDonald’s.  As they pulled up to the sidewalk, the gunman’s rampage shifted to the boys, killing two of them. One friend survived after being shot by, ironically, playing dead.

The sight of those children’s bikes with Y-shaped handle bars and small frames laying atop innocent young lives lost cannot be unseen.  Could three pals have been doing anything more pure and carefree just moments before?  Summer. Bikes. Friendship. Ice cream.

After returning to my apartment near the beach later that evening, the adrenaline ebbed, and profound sadness settled in.

​The cruelty and randomness of the events in San Ysidro overwhelmed me. I thought about my own childhood bike rides and the countless times I had ventured into a store or restaurant with friends.  I missed my family more than 2,000 miles away, including my younger brother who was only a few years older than these boys.  I cried, alone, in a beachside apartment and a city and a world that no longer felt boundless and exciting.

Decades later, I continue to have been spared cruel fate. But since arriving at San Ysidro that summer afternoon, life has always seemed more fragile and fraught.